Lotus Notes Version 8.x introduced the Eclipse-based extension with many new features and functions possible.  But along with that came a world of new opportunities for software failures. The introduction of the Fault Reports database made it easier to gather crash information, but still doesn’t provide any tools for fixing the issues or identifying the cause of many errors in the Eclipse configuration information that is stored in the \Workspace directory located in the Notes data directory.  It could present a variety of errors from the client closing as soon as it is launched to crashing whenever the user tries to send an email with an attachment.  The first step is to identify if the problem is related to Eclipse.  An easy test for this is to launch the Notes client in basic mode.  This can be done two ways:
1. Add this line to the notes.ini: UseBasicNotes=1
I prefer not to use this method since this is only being used temporarily.
2. The preferred method for this use is to edit the properties of the icon used to launch Notes and append  ” -sa” (without the quotes) to the end of the command line that has notes.exe so it looks like this: 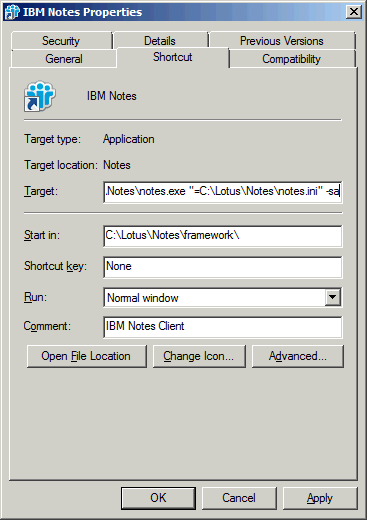 If you cannot reproduce the error while running in basic mode, the problem is probably due to an Eclipse configuration issue.
In such cases, the brute-force method of solving the problem would be to delete the \Workspace folder and cache.ndk and maybe even the bookmarks.nsf.  This may work, but it also deletes many settings that have been customized for that client.  A less drastic, but not publicly documented method is to launch the Notes client with parameters that will clear the Eclipse cache or reset the configuration.

Each of these commands has a specific impact on the Eclipse files.  The full impact is not publicly documented, so you may want to make a backup of the \Workspace folder first and if you have access to IBM technical support, it is best to open a ticket with them before using these commands.  But this is another tool to add to your Notes client repair kit.

For a related article describing an example of using the Fault Reports data to troubleshoot client crashes, check out my post titled:  The Single biggest cause of Lotus Notes client crashes and how to avoid them