← MTBF for Windows 64 bit OS
Visions of the Future →

Turning Your Weakness into a Strength

This article is based on a speech I gave at Toastmasters. 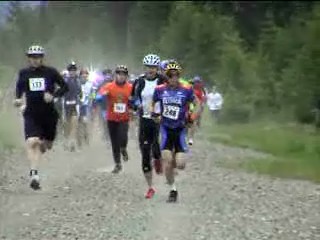 A few years ago, I entered a multi-sport race that involved a 25-mile mountain biking leg, a 12-mile kayaking leg, and a 6-mile run.  In preparation for the race I biked to work 40 miles round trip, 3 to 5 days/week.  I paddled 2 to 3 times/week.  I didn’t do any running because I didn’t like to run and I was already cycling which also trains the legs, or so I thought.

For the mountain bike leg of the race, I was the 4th fastest racer, 4 minutes behind the leader.
I was the 3rd fastest kayaker, 15 minutes behind the fastest kayaker.
I don’t know where I placed in in the run, but it wasn’t pretty.  I finished the 6 miles in 58 minutes.
Overall I finished in 6th place.  A major disappointment.  After doing so well in all the other legs, it felt more like last place.  If that were a job interview, I wouldn’t get the job.

The next year I was motivated to improve.  As I evaluated my training from the previous year, I figured I couldn’t do much to improve my cycling.  I was already riding 200 miles a week and in the 1-hour ride I was only a few minutes behind the fastest rider.  There wasn’t much room for improvement in the kayak either, except to get a faster boat.  That leaves the running leg, my greatest weakness.  As much as I disliked it, I decided I would just have to suck it up an do some running.  I cut back on my cycling days and started running at lunchtime for 30 minutes a day, 3 days a week.  That’s running 15 minutes out and 15 minutes back.  I trained this way for 6 months leading up to the race.

Race day comes around.  The race starts with a 1/2 mile sprint to the bikes, running out 1/4 mile on a gravel road, around a marker, and back to the bikes before heading down the trail.  The purpose is to spread the racers out so there isn’t a huge mob of cyclists going down the trail and crashing into each other.

I lined up in the front row of racers at the starting line.  The gun fires and we all start running.  I’m at the front of the pack.  I happen to be wearing an eye patch over one eye (that’s another story), so I don’t have any peripheral vision.  I can’t look around to see the racers beside me.  I’m just focused on watching where I’m running so I don’t trip.  Gradually the sound of the mob of 200 other runners tromping on the gravel starts to fade.
As I round the marker I can finally see that I’m way ahead of everyone.  As we reach the bikes I am in first place.  That is, ahead of all of the relay team racers too. This photo was taken just as we were getting back to the bikes.  I’m the guy in front with the yellow helmet and eye patch.  The guy behind me in the bright red running shoes is the race favorite in the relay team category.  He is an elite cyclist and his team was sponsored by runningshoes.com.  He still had to change his shoes when he got to his bike.  I am running in my mountain bike shoes.

Like the year before, I was the 4th fastest mountain biker and shaved 2 minutes from my previous time which was about how much faster I ran at the start.
In the kayaking leg there was a strong headwind, yet I still cut 5 minutes off my time.  That was good enough to be the fastest paddler not racing as a team.
Cutting 2 minutes in a 1-hour bike race and cutting 5 minutes in a 2-hour kayak race are both great improvements in their own right.  But the most impressive improvement came in the run.

In the previous year, I averaged 9:30 minutes per mile.  This time I ran my first mile in 5:35.  I finished the run in 38 minutes, a 20-minute improvement.  That was the fastest individual time and only 4 relay teams had a faster runner.  I finished the run 3 minutes faster than the next fastest individual runner.  That is a full 1/2 mile ahead in a 6 mile race.  Keep in mind I only trained for running 30 minutes a day, 3 days a week.  I changed running from my weakness into my strength.

Like a multi-sport race, most things we do in life require several skills.  If you are the best at one only of them, it won’t set you apart.  Being good at most of them won’t put you at the top either..  However, if you focus on your weaknesses and put the effort into eliminating them, you can turn them into a strength.  If you do this, you will surely be differentiated from everyone else.

If you apply this philosophy to your professional skills, it can make the difference between a no-thank-you letter and a salary negotiation.

What skills should you focus on?  Usually your weaknesses will also be those things that you least enjoy, like running was for me.  I hated running.  Now I look forward to it.  Don’t just focus on variations of skills you already have.  Look outside your core roles.  Diversify.  Generally, the skills that will advance you the most are those that can be applied to any job. If you’re a programmer, don’t just learn a new programming language.  Consider skills in system administration, technical writing, project management, or public speaking.
Whatever they are, as you eliminate your weaknesses and turn them into strengths, you will always set yourself apart.

Posted on May 7, 2011, in Uncategorized. Bookmark the permalink. 4 Comments.